Ken Etten, the chair of the Lake Geneva Historic Commission announced that on April 26, 2021 the United States Department of the Interior had placed the Oak Hill Cemetery in Lake Geneva on the National Register of Historic Places. Etten called this designation a “prestigious honor” and thanked those who had played a key role in nominating Oak Hill, especially Patrick Quinn, a member of the Lake Geneva Historic Preservation Commission, the historical consultant Gail Klien, and John Notz, a resident of the Linn Township. In 1880 the Village of Geneva’s Cemetery (today called Pioneer Cemetery) was full so the Village’s Board of Supervisors asked Jim Simmons and the Reverend C.A. Williams to seek a location for a new cemetery. Simmons and Williams learned that Cyril Oatman, a member of the Board of Supervisors, was willing to sell a parcel of property that he owned north of the Village.

The property was a very hilly area full of large oak trees. The village Board bought Oatman’s property as the site for a new cemetery. The nationally known landscape architect H.W.S. Cleveland was hired to design the new cemetery. The Sturges family from Chicago, who owned “Snug Harbor” estate on the shore of Geneva Lake, provided the funds to pay H.W.S. Cleveland for designing the new cemetery. During the first decades after the Oak Hill Cemetery opened in 1880 many well-to-do summer residents from Chicago who had homes on the shores of Geneva Lake were buried in the new cemetery. The graves of many individuals who had been buried in the Pioneer Cemetery (and their tombstones) were moved to Oak Hill. During the 20th and 21st centuries 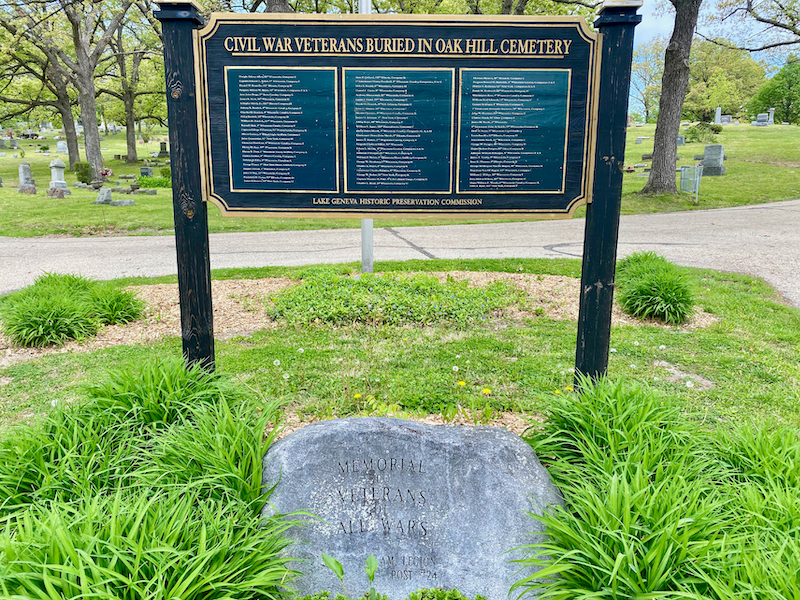