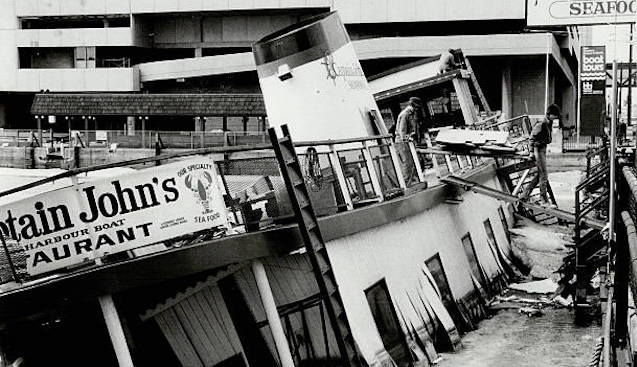 THE CHANGING FABRIC OF THE UNIVERSE

What do you feel like as you age and travel?  I don’t mean travel to foreign places on long-range planes, or staying in hotels in exotic spots you’ve never been to before. I’m talking about the kind of travel where you go back to an old hangout or return to places you like to travel to because you know them so well and because they seem to serve both your physical and psychological needs.  What do you feel when you run into something that is different? You are bound to. Like the favorite restaurant that has changed ownership and name and been redone to resemble something other than what it was, entirely.

What do you feel? Like the home you pass by that you once lived in, and it’s not there anymore? Maybe all the homes in all the places you once lived? The places plowed under and new places put up, or nothing there but a lot or field now? Schools you attended?  Gone.  As you age there’s also the consideration of people. Everyone speaks of the loss of friends and family as you age but seldom does anyone discuss just how kind of marginally rotten it is to lose someone of note that didn’t like you or get along with you either. Funny feeling.  How about somebody you’ve competed with all your life and “poof,” gone. Not good. Should be good, but it’s not good.

Fly into a place and the airport has been totally redone. All the old corners, lots and haunts are gone. Everything is nice and new…and just kind of awful.  Is there any wonder that the insides of older people’s houses look like, well, museums, and not necessarily good museums, either? And cars. How about a key that locks and unlocks the damn door? A key that actually starts the car? A radio that has regular buttons? How about gauges for gas, temperature, speed and maybe electrical power, and not all that other junk? What do you feel like with all this much ‘better stuff’ that does not seem at all “much better” at all?

I’m not taking any of this very lightly or well. Is this the reason that so many old people are grumpy?  Or is it simply the invention and use of 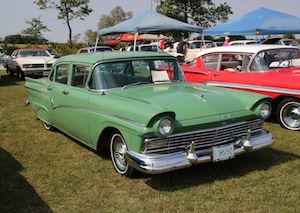 1957 Ford mirrors? Shit. Last week I went to a car show and got to take a close look at a 1957 Ford Custom 300, two-door sedan. It was green on green, exactly like my Dad’s new car back in 1957 when I was a kid. But the pristine restored car I got into was nothing like that old battle cruiser. The original car had perfectly awful paint that reflected little back when the sun hit it. Not like this new version of the old thing. The seats had fabric that managed to hold together less than a month. The windows jammed on the original, and the passenger seat never did adjust anywhere. My Mom cursed it royally all the time because, although the car was pretty fast (as fast as a Corvette in that year), it stalled when she floored it from a stop, which was every time.

Has technology changed almost everything for the better? Yes, it has, but some things we want to remain as they were and the reasons why we want that are not fully explainable. How about music? Saying the words, where there are words, with little in the way of musical equipment or melody wasn’t called music back in the day. It wasn’t called anything, much less having its own identifying genre (like rap and hip-hop). But times have changed. ABBA, from the old days, the disco-dominating group of the 70’s and 80’s is getting back together to put out two new songs. The four ABBA performers are all in their early to mid-seventies. Their return should be nostalgic, fun and funny, all at the same time. Or maybe, really sad. This willowy group of attractive men and women (two men and two women) will present themselves to the public once more, so many years after they performed their first song in a European music contest. They won that contest with a song inappropriately named Waterloo. Fame came calling. The group held together until 1982 when the shuddering, painful and messy misery of real worldwide fame bit deep, and they couldn’t take it anymore. Now, what the hell, they must wonder what they have to lose. It will be fun to see and hear what they have come up with, but the listening and watching will be done with some trepidation. They are going to use online ‘avatars’ instead of appearing themselves. I think the appropriate expression here, in view of their ages and likely real appearance, might: be “no kidding.” Will this aged group take those of us, who were around when things were different nearly fifty years ago, on a tour that passes one of our old houses in slightly dilapidated condition, or will it showcase the empty lot that isn’t to be called an empty lot?

We move on and into a new world every day, not identifiable as that except in the tiniest, nearly unobservable increments, and we must do so with some sense of excitement or at least acceptance. To let go of the things of the past is to free up mind and body, and to try and eagerly grasp the unknown things coming at us that we call the future.
~ James Strauss