$605 for South Lake Shore Drive BigFoot erosion control. That is the start of erosion control for that road. What’s the money for? It seems that that amount is what is required to be paid by the City of Lake Geneva to the DNR for nothing, because that’s what the DNR returns for the six hundred.

One would think so for a city, like most other cities, that charges for permits to regular citizens when there is no expense involved on the part of the charging entity. And don’t bother arguing that inspectors are paid by the entities whether they inspect anything or not. Lake Geneva is a living, billing complex, where baggage charges for airline travel seem downright fair. Try getting charged because you needed the paramedics to come to your assistance, or anyone else’s assistance. Try having to pay for every piece of firefighting equipment (and person) that shows up to keep your house from burning down. Oh, you have to pay even if your house burns down. T

he city’s big scandal should not be over salt. It should be over the amount one has to pay for the Preparation H, necessary when wanting almost any service whatever from the local government providers. So far, the police will still come and arrest you without charge. When you get to Walworth county lockup that’s another story entirely, of course.

Authoritarian deceptive behavior on the part of leadership is just as prevalent on the local level as it is on the national level. Apparently in the current democratic climate of the United States representatives get elected by promising to be open and transparent about their dealings. They stay in office by being the opposite. The public has come to almost regularly expect that kind of behavior on the national level. It’s never been quite so apparent on the local level.

What happened recently to illustrate this wide disparity of promises and reality?

The Lake Geneva City Council passed an ordinance gutting the referendum rule that was in place for the building of public projects costing more than a million dollars. The earlier referendum ordinance, passed into law by previous city councils, required the voting public to give majority consent to such large capital cost projects. Then the parking structure project was overwhelmingly voted down earlier in 2015. The Lake Geneva City Council that had unanimously approved the project got angry as hell. They used their power to pass an ordinance, written by the “good riddance” former city administrator that completely gutted the referendum ordinance. Now the city council can do what it wants.

Only in the Geneva Shore Report will you see any revealing news about what they did because that is how things generally proceed in the political arena. The pork from pork barrel projects, like the parking structure, BigFoot road re-route and the new Flat Iron pavilion, bleed over to almost everyone involved, including media outlets that are supposedly objective but very much dependent upon advertising revenue from the very sources lined up at the trough to get the pork! The Geneva Shore Report is not worth slipping any pork to, so remains relegated to a spot at the trough where only ground beef (read red slime) from unlabeled packages is served. 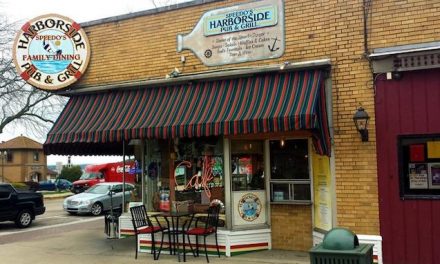