What happened to the fish?
Oh, if you’re not old you don’t know. The Gar are gone. The Cisco went away. Great Northern and Walleyes are so uncommon that everyone gathers around the lake if one is brought in on a hook. Perch, the former Friday night fish fry star, are now rarely found in our lake. What happened over the past fifty years?
Fishing changed.
It’s not seeding the lake that’s changed. The fish hatcheries are actually putting more fish into the lake, than ever before. But the fishermen of today are, taking a lot more out than ever before. Advances in technology allowing fisherman to see under the water, newer faster boats, and downriggers, have changed everything.

What’s going on with these early season fishing tournaments, and what can the 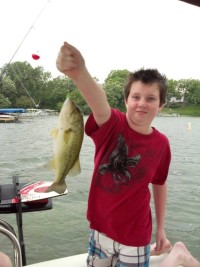 communities around the lake do about it? This is the other big change in fishing at Lake Geneva. The fishing season starts well before spawning is over. Then the trophy tournament fishermen come in. They catch and release. A policy that sounds as if it’s really conserving the fish in the lake. In truth, the fish are caught by the tournament people, pulled in and placed in a cooler to be run back across the lake for measuring and weighing. The fish are then released. And they are released so far from the spawning bed, that they never return. No spawn. No replacement fish for those lost by a factor of hundreds.
The fix?
Simple to understand, but almost impossible to implement. Open the fishing season one month later in the spring of each year. Only a Lake Use Committee, like the one already in existence, could do such a thing, and the current LUC only has advisory power.
Everyone who has been married for a long time understands the power of having only advisory influence.

7/26/15 5:05 PM CST I haven’t had the time to fish LG this year, but it appears that the same old same old is going on with respect to boater safety concerns and lack of policing by the local “authorities”. You can do what I did. Contact the DNR on their website and suggest that they step up their presence on the lake. Another suggestion I made to them was to institute a no wake from 9PM to 9AM. That would allow fishermen to have their time on the water as well as give the pleasure boaters the lions share of daylight hours for their enjoyment. This body of water offers way too many resources for everyone not to be able to enjoy them safely.

The Featured Photo:
The Wisconsin inland state record for brown trout is a 34.3 inch long fish weighing 18 pounds 6 ounces. It was caught on May 7, 1984 in Lake Geneva by Perry McKittrick

If you plan to take your dog to the city’s new Dog Park, then you need to know a few facts about it.
There are no trees or fire hydrants in the park. So you may wish to take your dog by the Disc Golf sign located at the Disc Golf Course before entering the dog park. The dog park entrance sign reads: “All dogs must be legally licensed and vaccinated. Dogs are required to wear a visible municipal license, and I. D. tag. Wis. Stat. 95.21 (2).”
This appears to be a straight forward banning of unvaccinated, unlicensed dogs or dogs with no or invisible municipal licenses from the park; however, according to the city ordinance sec. 10-92, you may obtain an application for the required municipal license from the treasurer-see Teresa Klein- (a position that the city abolished a few years ago). But you don’t pay the non-existent treasurer for the license fee because under sec. 10-93 (a) the Lakeland Animal Welfare Society, Inc. is designated as the official collector of the fees, and who under sec. 10-93 (b) shall remit all license fees and license blanks as directed by the treasurer, whose position no longer exists.
So although this may seem confusing, the $100 fee for violation of section 10-94 is clearly stated on the sign, which is not clear because section 10-94 includes all of article III dogs and cats, which means the fine also applies to cats, that are not currently prohibited from using the dog park.
Maybe the best thing to do to avoid getting into trouble, is to simply write a check to either Dan Winkler or Dennis Jordon and go direct, or ‘mainline,’ the money right to its very foundations. 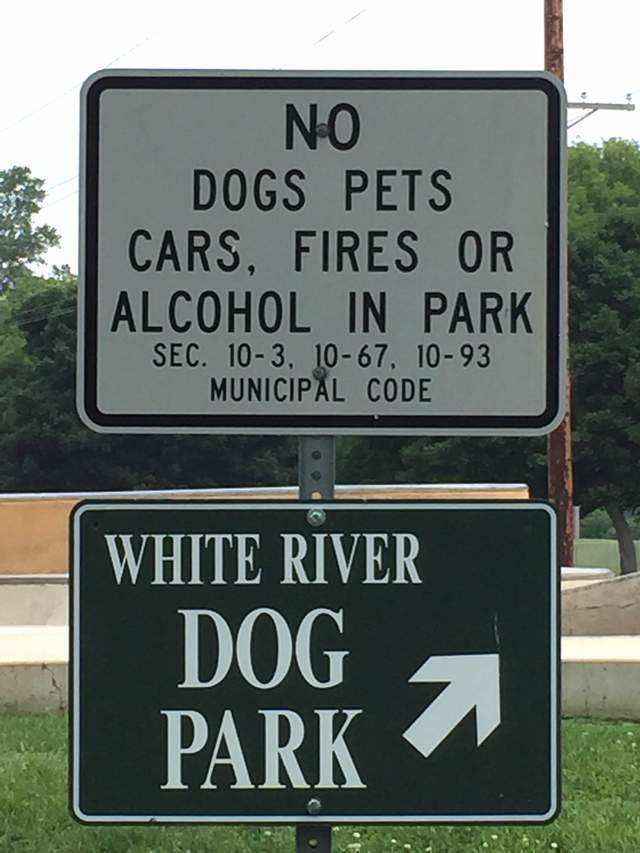 A kindly citizen sent in this photo of the dog park sign at White River. Note the dissonance which goes right along with the rest of the dogged confusion with respect to Lake Geneva city management and the dog park. The phrase “going to the dogs” comes to mind.