Why should everyone living around the lake care about the entire Geneva Lakeshore? Nothing unites a community like a disaster. Unfortunately, following a disaster is usually the only time when people set aside personal issues, diminish their own self-interest, and rise to the occasion in order to attend to the greater good of the whole community. You see this coming together occur all over the country after the devastating effects of tornados, floods and hurricanes.

Well, there’s a crisis fomenting on the south shore of Lake Geneva. It’s not a natural disaster, it’s a man-made one. The new Geneva Inn Management Team seems to have either transformed themselves into developers or, even more likely, are working on behalf of a big commercial developer to commercially develop Buttons Bay. Such commercial development of the shore could be an absolute disaster for Lake Geneva, and the other communities surrounding the lake.

Can everyone living around the lake come together on Aug. 24th at the Linn Township Hall to protect the lakeshore before a disaster occurs, rather than after?

Whether you live on the lake, live close to the lake, drive by the lake, boat or fish on the lake, or tour the lake by boat or by the shore path, everyone lives in the ‘glow’ of a lake that is uniquely “special.” Geneva Lake is one of the most admired and respected lakes in our country, and around the world (listed on Thrillist’s 12 most Impressive Lakes in the World). This prestigious heritage should be proudly embraced and receive a tremendous amount of support from all the lake communities. It also merits all the lake communities showing up to oversee what others intend to do to it.

Commercialization. It can be something very good, or it can be terribly bad, depending on where it occurs and how it is fashioned and controlled. Without question, any commercialization of the Geneva Lakeshore has the potential to create a disaster the lake might be generations coming back from, if ever. Commercialization, since the lake has been basically protected from it in the past, might be like a malignant cancer that could spread and destroy the very essence of what makes Geneva Lake world famous, and so special to everyone living around it and visiting it for recreation and fun.

If the new Geneva Inn business manager were permitted to invalidate the Town of Linn Comprehensive Plan, and rezone the lakeshore property for commercialization, the floodgates would be opened-up for more of the same commercialization, anywhere and everywhere, around the lake. Other developer’s cannot be denied the same rights the Geneva Inn would be given. Hummel’s four million dollar “dividend” for doing nothing has proven that to every entity around the lake that might seek to deny, slow or limit development. The comprehensive plans, and special property zones, were put into law to limit the amount and kind of development commercial ventures could pursue. Those plans and zoning protect all the residents, without giving advantages to any specific residents, or outside developers.

The Linn Township Comprehensive Plan was compiled from community surveys, and was the result of direct public input, not simple representational decision. Today’s Town of Linn Comprehensive Plan specifically states that no commercialization of lakeshore residential property is allowed, but the Geneva Inn wants that reversed to suit commercial expansion. And they don’t want appear to want it it reversed by a public vote! They very demonstrably are asking the Linn Township Board to overrule the public. Nevertheless, no matter what political games are attempted, the comprehensive plan is the “Plan of the People,” and if the people want to keep the comprehensive plan the way it was written 11 years ago, then they must show up to lobby for and defend it on August 24th, at 7:00p.m. in Zenda, at the town hall. Only public advocacy can stop commercialization of the lakeshore now. And such advocacy will send a message into the future that the Geneva Lakeshore is not for sale to those who would use it for commercial gain, at the community’s cost and expense. That meeting on the 24th of August will be the only meeting where potentially damaging actions may be taken.

If Ansel Adams were still alive today and visiting Lake Geneva, he’d warn everyone with some of his famous words:  “Guard it well, for it is far more precious than money…once the beauty of a picturesque lakeshore is degraded by commercialization, its uniqueness can never be repurchased at any price.”

The defenseless lake itself, and the ecosystem it supports, needs heroes and guardians to show up on August 24th, at 7:00p.m. at the Linn Town Hall to attend the public hearing, and to tell the Linn Town Board and Plan Commission to tread extremely carefully when looking at these proposed changes, that could portend disaster by the Geneva Inn, by these forces. 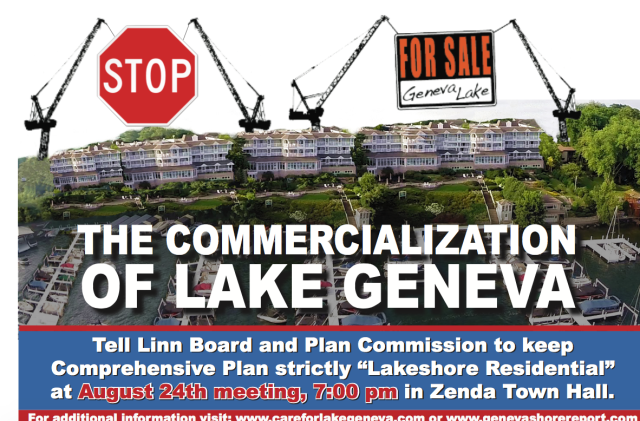