Why BigFoot Beach, as an expression of goodwill by all the communities around the lake, is important.
No matter what anyone, and that means everyone, might say in objection, the idea of having a family come to a Geneva Lake community and have to pay fifty bucks to simply get in the water is a lousy idea.  Yes, that money charged (eight bucks a person at the Lake Geneva beach, pays for the upkeep, lifeguards, and even the cleaning of bathrooms, but it also sends an anti-family, anti-low income, anti-good feeling message to those attending.

BigFoot Beach has been the exception to all of that.  The only free beach on the lake, families coming having to pay for the only parking across South Lake Shore Drive, which is eight bucks a day for Wisconsin-plated vehicles and eleven for out-of-staters.  How about that?  What is the problem?  The communities who have some say in the maintaining of BigFoot Beach do the absolute minimum to keep it a beach at all.  A very tiny swimming area, a beach that is all of eight to ten feet of sand, and boaters moored all over the place, mooring for no charge by the way.  What would be so wrong with trucking in about twenty trucks of sand every season?  One large dump truck of Wisconsin’s biggest export (yes, it is sand and not cheese or milk) holds fourteen tons of sand.  Delivered, from a variety of sources nearby, and spread out beyond the rocks at BigFoot, would cost about five hundred dollars.  Ten thousand dollars a year to make BigFoot into what it once was.  Why not?  The goodwill, the scenic improvement, and wonder would be so worth it.  Ten thousand is about one day’s ‘take’ from the beachgoers going to the shore in Lake Geneva alone.

Black Brick Landscaping does it again, slashing their charges for tree work and rock walls by almost fifty percent.
This Harvard-based outfit, doing almost all of its work in the communities surrounding Geneva Lake, is a wonder and the people working there are so great you end up, as a customer, automatically getting them cold drinks and other small delights.  They love it.  You will love it, and them.  The number there is 815 403 1844.  We recommend some businesses from time to time, and we do not do it for money.  This is one of them.  Their ad in our paper is placed there for no charge, as they are part of keeping the wonder and great service ethic around the lake.

Mayor Klein gave the City of Lake Geneva, and anyone who wanted to listen, an update at the Business Improvement District (BID) meeting.
Her short presentation was all about the re-opening of the Riviera following the redo, as well as the celebrations soon to be held there. The newly renovated Riviera has become, or maybe has always been since she was a young girl, the apple of the mayor’s eye, so it is only fitting that she would want to celebrate its return with the people of Lake Geneva. July 15, 2021, has been declared Lake Geneva Day!

Lake Geneva Day will be a celebration of the city and everyone who gathers to attend. The inspiration for this day came from the Lake Geneva Mayor who served back in 1933. and who also had a day for locals. This day will include free parking for all with a city parking sticker, an open house at the Riviera, highlighting the ballroom and first floor shops, from 10 a.m. through 8 p.m. There will be a rededication ceremony at 4 p.m., and a free evening concert in Flat Iron Park from 5 p.m. until 8 p.m., featuring Swing Nouveau Orchestra. A “String of Pearls” gala will be the next re-opening celebration at the Riviera, on Saturday, August 28, 2021, a special date that commemorates the original opening in August of 1932. The evening will include cocktails at 5 p.m., dinner at 6:15 p.m., dancing until ten.  The world-famous Glenn Miller Orchestra will provide music.

Ticket sales start on June 10th at riverregalia.eventbrite.com, and proceeds will benefit the Lake Geneva Fire and Police First Responders Fund. Be prepared, and yes, a bit shocked, with respect to the ticket prices, as they range from $200, up to $350 (that’s dollars of U.S. currency). This event sets itself up to be an event that is certainly not for everyone, particularly the local Lake Geneva residents and citizens, who have an average annual income of only $30,000.  That’s twenty-five hundred per month gross.  Not likely that a couple is going to pay seven hundred dollars for such a one-night event.  There has been no publication or information available yet to let everyone know what the difference is between a two-hundred-dollar ticket, although rumor has it that the big spenders will be brought in by Gage Marine on special party boats.  This is not an event for everyone, but for the ones who attend it’s likely to be a great opportunity for wearing black tie outfits with a string of pearls.  The GSR will have to sneak around the event as the publisher will not fork over that kind of cash. 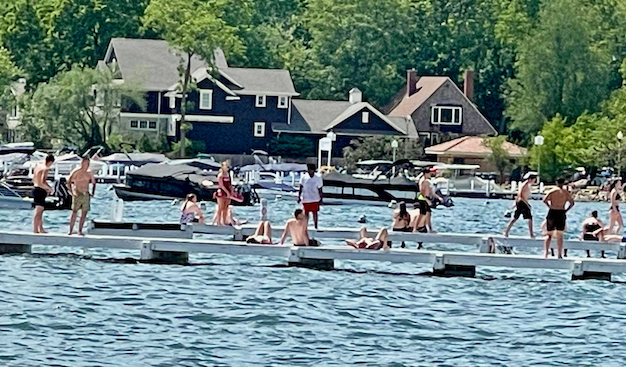 GSR Weekly Picture of the Lake. Sunning on the piers of Lake Geneva. 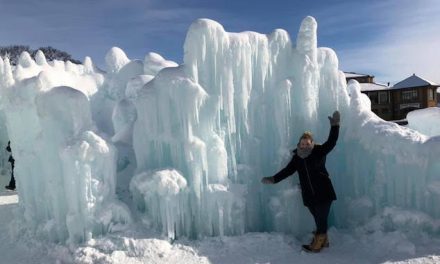 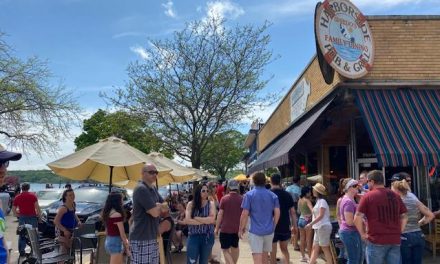 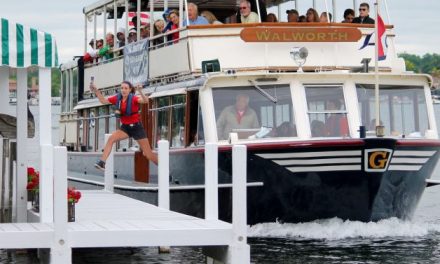