Slow incremental changes (as are being done by the Fire Department), are often not seen or understood until the changes have been made and it is too late to do anything about it.
Despite having very few fires in the city, the Fire Department’s budget is growing like a cancerous tumor, as they plan to drive out private EMS (emergency medical service) Paratech, (Medix is already gone) and to take over the emergency medical service for the city and then to expand coverage to include the entire lake area. To achieve this objective, the Fire Department is in the process of building around the clock paramedic staffing (paid on premise personnel) for multiple teams of paramedics to which additional locations, equipment, and staff will be needed. All of which this will be built and funded (paid for) by Lake Geneva residents. Some of the Fire Departments large show up as budget increases, but the additional increase of $230,000 that the Fire Department netted from transferring the paying of the fire hydrant rental fee from their budget to water bills, doesn’t.

Be aware that the tax burden on residents will continue to increase as the City of Lake Geneva’s Fire Department continues to expand into the EMS area and drives out Paratech (a private pay only if you use it service). But do not expect a discount for using Lake Geneva’s EMS. You can expect to pay and to be charged the same as Paratech, even though you as a Lake Geneva resident have already paid for the equipment and personnel with property taxes. If a private business did this it would be called double dipping.

Small things occurring around the lake:
1. Tony Valenti, the owner and some time operator of Avant Coffee Shop and Expensive Bicycles is running for the city council in Lake Geneva.  From his apartment above the coffee shop, and looking out over Broad Street the last six months, he’s no doubt figured everything out and is ready to make changes.  His personality would appear to be better served as a cut man in a boxing club but who knows about politics and who gets to occupy the leadership positions today?

2.  Theresa Loomer, the current City Clerk of Fontana, has beaten out 42 candidates to collar the job of city administrator.  This is a wonderful woman who also delivered twins six months back. That the city has recognized her quality and work ethic is a great thing for all the communities around the lake, not just Fontana.

3.  Jeff Cates.  The decision to promote Jeff to the chief’s position after the nasty former chief retired has proven to be a godsend for all citizens and visitors around the lake.  No more of the rotten hidden traffic traps where the speed lowers. No more police cars lurking in the distance to breathalyze anyone who puts a key in an ignition late at night out in the parking by Chucks.  There’s still one marginal officer on that force and it is very likely Jeff is working with that problem on behalf of all the citizens.  Great job, Fontana leadership!

4.  The roadwork on Highway 50, in front of the library (800 and 900 blocks) in downtown Lake Geneva will start almost immediately and will go on for two months, or possibly three.  The Willkomm Excavating Company will be replacing the road foundations and water mains.  Traffic is going to be rerouted to Geneva Street, one block to the north.

5.  RRB Bicycles has closed its operations on Williams Street.  They left a number for their store in Kenilworth, IL but that number is currently disconnected. 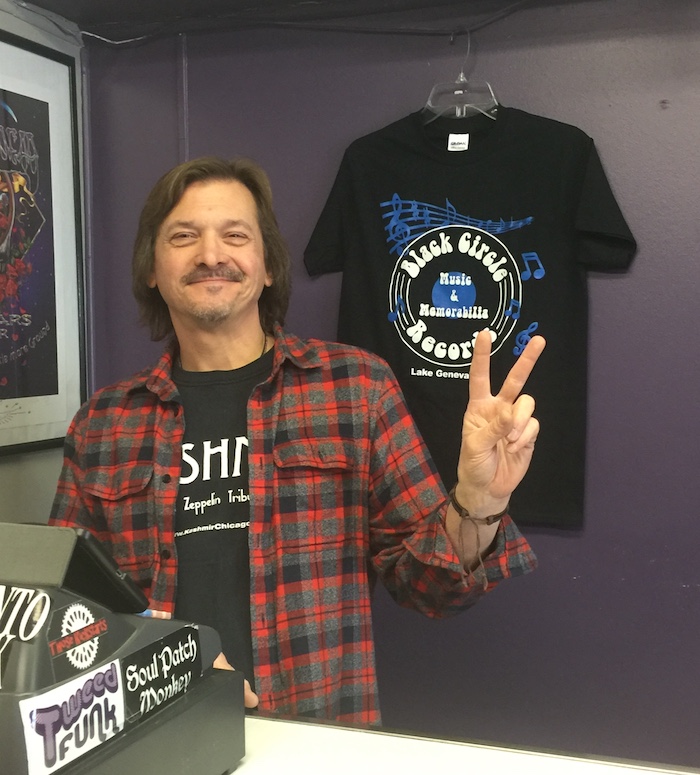 Tim Townsend is celebrating six years of doing what he loves. He has a passion for music and prefers listening to it the old-fashioned way, with albums and good friends. Go in and browse in his shop Black Circle Records at 516 Broad Street. You won’t be sorry.