The pavers of Fontana in front of the Fire Department are slowly sinking into the earth.  What is Fontana attempting to do?  Are they going to take the hints that Walworth County, the State of Wisconsin and even Lake Geneva have thrown their way, and stop using temporary runny crap and replace it with the more solid brown stuff?

The cobblestone pavers, thought to be such a cultural advance and exhibition of elegance for small conservative towns, were proving to be about as stable, smooth and well built as Highway 50 out near Pesches, or the new “redone” Highway H in downtown Lake Geneva.  When there is no respect for foundations then there are no foundations to build respect upon.  The fake cobblestones came  out of the fake results of the fake project, that was unfortunately built with real money.
Will Fontana step up and swallow the bitter pill of acknowledging an error in judgment? Not bloody likely… but maybe Fontana is different from most of the rest.  Monopolies usually do little to help, service or add to people’s bliss or well being. ( Note how the monopolies of gasoline sellers, airlines and cell phone companies have turned out for the public.)

The featured photo is from Grand Haven, Michigan.  Seems several towns are finding the folly in using pavers?

Photo Credit: (Tribune photo/Alex Doty) Crews reinstall brick pavers in the midblock crosswalk in downtown Grand Haven. City officials say the crosswalks in the first block of Washington Avenue have been failing since they were installed nearly two years ago.

Hawaiian Bratwurst at Piggly Wiggly.  Usually, individual foods don’t make it into the Geneva Shore Report as any kind of feature.  Well, Piggly Wiggly just changed that with the invention and production of a multi-cultural chunk of sausage they call Hawaiian Brats.  Mix some great ground meats with some pineapple chunks, throw in some soy sauce, a bit of sugar and special spices, and Voila!

This is special stuff and costs no more than the regular brats.  You will be impressed.  They also make a special burger but you have to know somebody to get some.  Ask for the mixed brat and beef burger.  They might just take pity on you and slide a few across the counter.

So Lake Geneva lost one of its olive oil operations.  So what.  Soon “Good Vibes” will open and it’s not a headshop, sells no vapors, vapor machines or other paraphernalia.  It’s a juice shop.  The old crepe place left months ago and Good Vibes is building in.  To open later this month.  Michelle, Smantha, Robin and Megan are the four young women putting this magnificent effort together and they are doing a wonderful job.  All four women have been involved in other Lake Geneva retail shops or come from families involved. 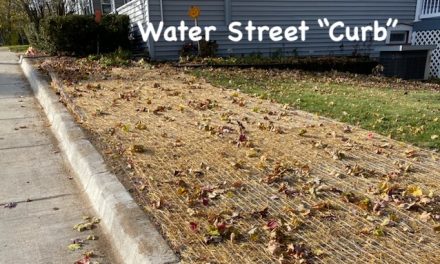