Her name is Smith.  And Mrs. Smith won.  The Town of Linn had a meeting the other night (Monday).  They met to listen to a bunch of Town of Linn taxpayers (and none of those people are small taxpayers) discuss just how outrageous they felt about anyone messing with the stretch of South Lake Shore Drive being considered for rerouting.  Mrs. Smith wasn’t there, but she won anyway.  Mrs. Smith bought a house a year or so back and paid a lot of money for it in Trinke Estates (the only home development area that has its very own inlet and private boat slips).  It seems that Mrs. Smith bought a house that was five feet too close to a nearby stream and a foot too close to the lake.  She asked for mercy from first the planning commission (they gave it to her unanimously) and then the town board for final approval.

The vote was four to one in favor of magnanimous mercy and one vote opposed.  The balding, leaning right, supervisor who voted no did so because he’d previously built a garage too close to a public road and been forced to move it.  That supervisor is running for town board president in April and he needs a good solid voting down to reward him for his generosity toward Mrs. Smith.

The funny thing about the vote to save Mrs. Smith from ruination wasn’t the rather sourpuss vote of the ‘bald eagle’ supervisor.

No, it was the dog.  The dog voted for Mrs. Smith.  What dog, you ask?  When the voting was going on 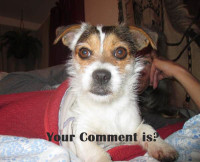 there was one supervisor missing. Actually, she wasn’t missing. She votes and listens to the meetings on her speakerphone at home.  The reasons for her remaining at home are not well advertised so there will be no tabloid-style comments about why that is in this issue.  The woman at home on speakerphone has a dog living with her.  The dog was not known to be there by everyone attending the meeting until the vote was called.  The town board president called for the vote, asking for the ayes.  Four people said “aye,” and one dog barked over the speakerphone.  There was a dead silence in the town hall.  Finally, the town board president, who should be re-elected for what he said, stated: “the dog is presumed have voted aye, and the ayes have it.”  The ‘bald eagle’ stubbornly murmured a mumbled “no” into the silence following the results.

Mrs. Smith was saved by the overwhelmingly popular vote of a dog, and the Town Board of Linn, which has a heart, along with a Town of Linn Planning Commission, that also appears to possess of one of those warm beating things.  Trinke Estates recommended a “no” I their letter to the board simply because they are the Trinke Board, a board that might better be known Trinke without the ‘n.’

When Anice Machado was head of that estate board nothing like such a refusal would have ever happened.

Don Corleone is seething and he’s not wrong.

The guy who owns that most excellent Italian restaurant (named Corleone’s) located at the southern end of BigFoot Beach isn’t named Don.  His name is Sal.  Sal used to run a set of condominiums located in downtown Lake Geneva (renting them out for an association of owners).  Sal approached the senior editor of the Geneva Shore Report in his parking lot where the editor was covering the flight of a drone taking shots of BigFoot Park from high in the air.  Sal felt maligned because there have been rumors about financial misdealing that allegedly occurred at his former place of employment while he was there. 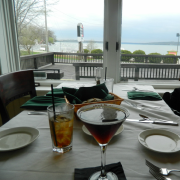 He mistakenly believed that such allegations of misdealing were written about in the Geneva Shore Report.  The GSR denies that.  No accusations of mismanagement, misdealing or downright theft have ever been made by the GSR about anyone connected to members of the human species known to be of Italian descent.  If members of that part of the species (rather obviously symbolized by the Corleone Restaurant name) are offended, then abject apologies cannot be expressed in a more heartfelt or cowardly manner than they are being expressed right here and right now.  The Geneva Shore Report, along with all current and former members of investigative, editorial, operational, distributive staff apologize.  Their families apologize too.  Distant relatives of their families apologize, as well. 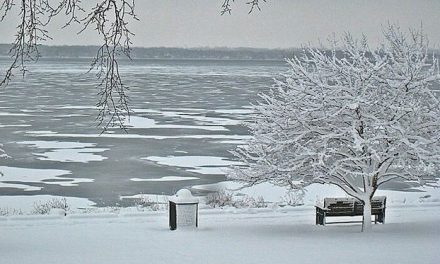