Why a brilliant woman named Sylvia, in charge of Lake Geneva parking, is made to do dumb things. For money. That’s right. Lake Geneva’s parking situation, as discomforting, inconvenient and anti-business as it is, remains an ever-increasing source of immediate cash revenue for the city. Sylvia is the titular head of the parking department in everything except decision making.

She follows the orders put forth by the parking commission by way of the city council. Recent decisions about the expansion of paid parking into unsafe and downright burdensome locations are not her fault. She has to implement these poor decisions, and then deal with the liability claims that will eventually be the result. When a city places parking stalls where they are unsafe by the nature of their location, then the city, and not drivers or car owners, become liable for damages and injury.

Cars passing stalls that are badly positioned near street corners or along streets too narrow for their safe accommodation, are simply stalls waiting to become a part of a lawsuit. An automobile, passing a truck legally parked, but sticking out too far into the roadway so a passing vehicle must cross the center line to get around it, is going to be absolved of all liability when that same moving vehicle encounters another in a head on crash. The city’s already highly rated premium liability policy will become even more strained by such nearly automatic charges to it’s claim reserves.

At the end of the day, Sylvia will be rumored to be at fault. That’s the way real life works. Councils and commissions are filled with people ‘passing in the night’ while Sylvia remains in her position.

The Gary Larsen phrase: “Bummer of a Birthmark, Hal,” comes to mind. 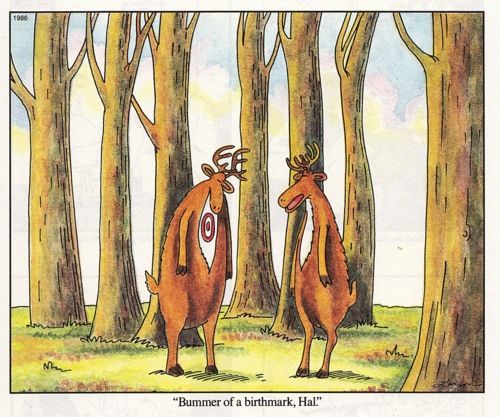 Oil wrestling but without the entertainment value.

Nothing. Not a damned thing.

There’s no action being taken with respect to the cooking oil that’s being deliberately, or inadvertently, dumped right into the clear, clean waters of Lake Geneva, not a hundred yards from the swimming beach. The oil being collected in select oil collection containers, up and down the back alleys of Lake Geneva, is from deep fat fryers and grills. It is used cooking oil. Not the kind that gets rubbed on bodies so people can be entertained by characters (usually women) adorned only with oil and wrestling in a small ring. The used cooking oil, growing more rancid by the hour as it sits in plastic tanks near storm drain grates, isn’t that kind of oil at all. The only entertainment value is in how some of Lake Geneva’s most popular restaurants are using stealth and early morning hours to avoid going to the trouble of properly disposing of the oil. Those same restaurants, nameless here because their names are as yet unknown, may be unhappy when they discover that the Geneva Shore Report is putting up video cameras in those alleys. Those cameras with infrared see-in-the-dark capabilities.

There will be a follow-up story soon, with photos.
Stand by. 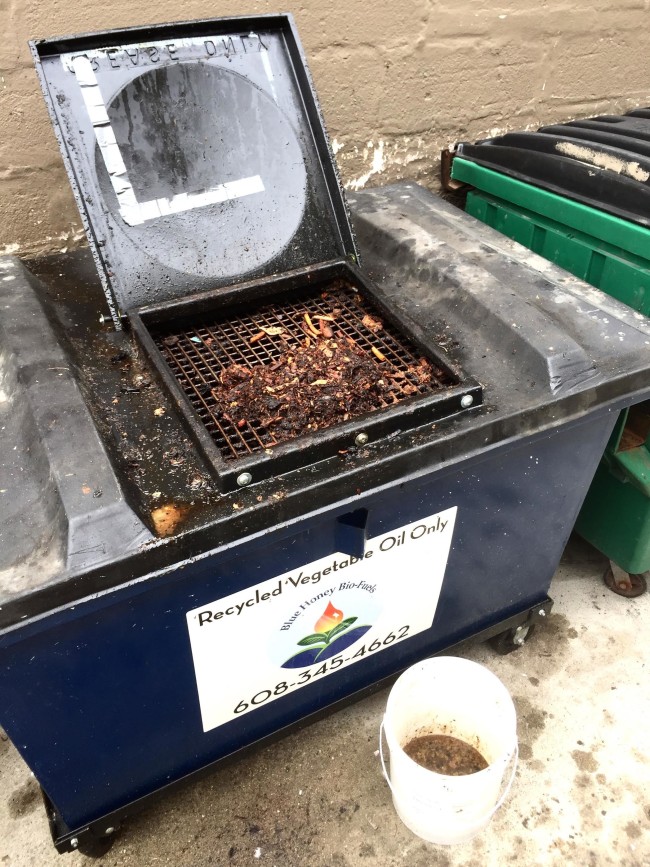 Grease you ask? What grease? this is one of the containers specially dedicated to collecting the grease from downtown restaurants. Not a pretty sight. The five gallon can is for when the grease dumpster is full. The dark spot on the ground is from spillage, of course. The storm drain running directly into Lake Geneva is located only fifteen feet away and it’s downhill to get to it. 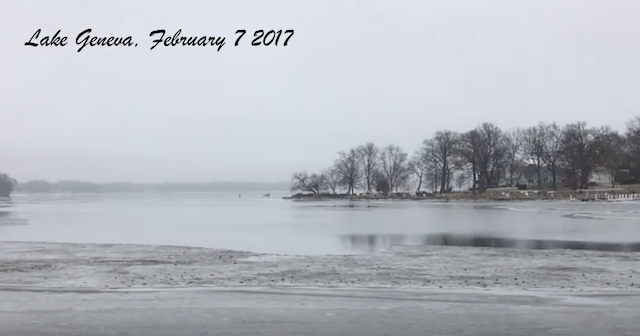